William Roberts was a local shoemaker and cordwainer and served as chairman of the Parish Council for six years. Click on picture to enlarge. At the bottom of page is a history of William Roberts and his family. 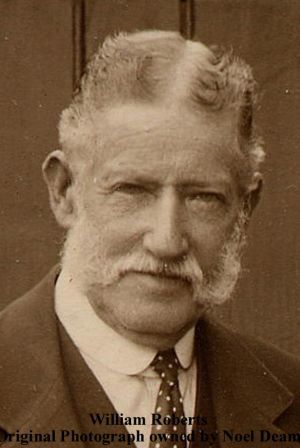 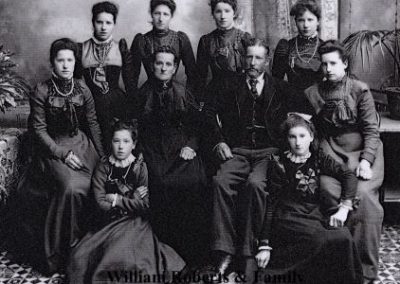 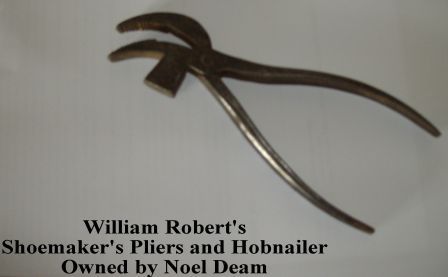 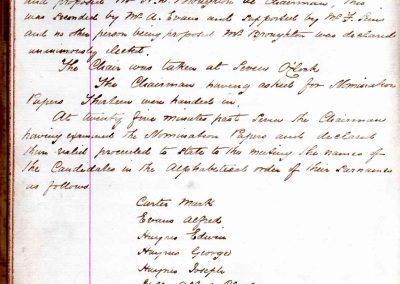 William Roberts (1850 – 1936) was a prominent figure in Marston.  Married to Elizabeth Carter he had eight daughters. He was born in one of the Church Cottages in Elsfield Road (since demolished).

He was a Member of the first Parish Council formed in 1894 gaining the most votes (39) and was later Chairman for 6 yrs. (Refer also to LINK). He was also Secretary of the Albany Lodge of the Manchester Unity of Odd Fellows, a benevolent society.

William Roberts’ main trade was a Shoemaker, more particularly a ‘Cordwainer’.  He made the shoes for his wife and family and would walk miles to deliver shoes to his customers.  He also was a Gardener, and drove a pony and trap, taking parishioners for shopping in Oxford.   He owned a little secluded garden in Back Lane which had a potting shed with paths edged with blue bull nosed bricks leading around a variety of apple trees.   At the far end was an array of Lily of the Valley which his daughters sold on Magdalen Bridge on May Morning.  It was sold in 1969 and now the site of a detached house at the end of Arlington Drive.

William Roberts moved with his wife Elizabeth and family to Rose Cottage (later called Rosebank) in Main Road (now 71 Oxford Road) in the early 1900’s.  which was left to Elizabeth by her brother Joseph Carter* on his death (probably soon after 1911.).  The property was divided into three dwellings until 2003 when they were converted into two. One retained the name of Rosebank and the other named Shoemakers, as that part had the workshop where the shoes were made.  A pair of shoemakers ‘pliers’ are the only item remaining, now in the possession of the author.  These had a dual purpose with the hammer head for hobnailing.

He and his wife sang in the choir, and with his father and brothers, rang the church bells, a service which the author also gave to the church years later. He also tolled the tenor bell for funerals.   At the time, there was an earlier balcony to the one which now exists. This was where the church orchestra played.  There were two clarinets, and a bassoon.  One clarinet was played by Elizabeth’s father, and the other by William’s father.  One was given to the church by Betty Deam when the other one was stolen from the glass case where it used to be mounted on the organ when it was in the side wing (The present whereabouts is yet to be located). William played the violin which now belongs to the author of this documentary.

One of his daughter’s, Margaret died when she was 18.  She worked as an assistant in the village school. She is buried with the elder sister Florence in the Church yard.  Another daughter Mary later ran the Post Office where Bessie Matilda also worked and delivered the Post, both featuring on the front cover of the “The Changing Faces of Marston”, Book One.

William and Elizabeth Roberts are buried in St. Nicholas Churchyard with Mary Ransom. The gravestone is quite visible, but the curb stones were destroyed without the family approval a few years ago, to make way for the internment of Ashes of others.

There are several descendants of the Roberts family living in the village today.

*  Joseph Carter was a brick maker at the brickworks in New Marston which he probably part owned with Mark Carter.  He also owned three cottages in Ferry Road, New Marston which he left to his niece Ann Edwards.      Refer to “The Changing Faces of Marston” Book One p87.