Previously access to the bypass was from Mill Lane, which lead to a number of accidents. The proposed flyover at Marsh Lane was first submitted for approval in 1958. Click on picture to enlarge it. At the bottom of the page are three articles from the Oxford Times and Mail. 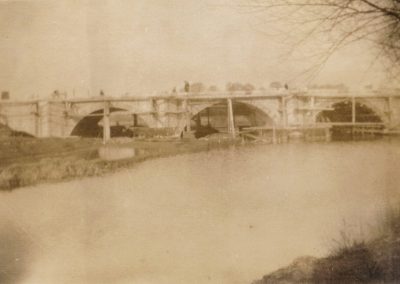 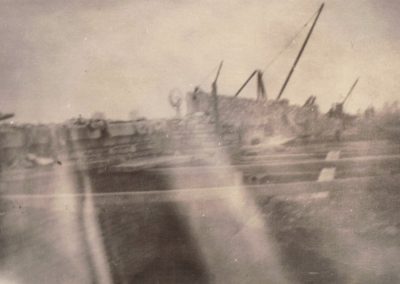 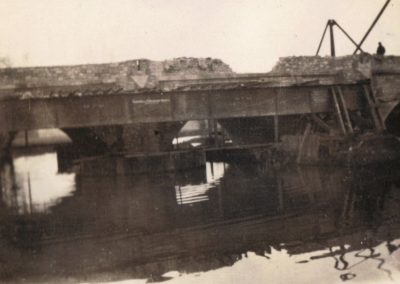 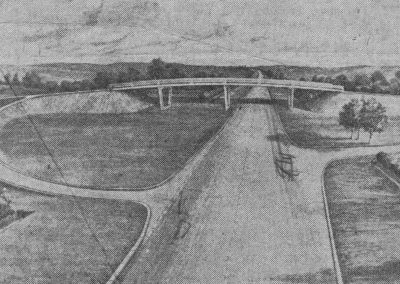 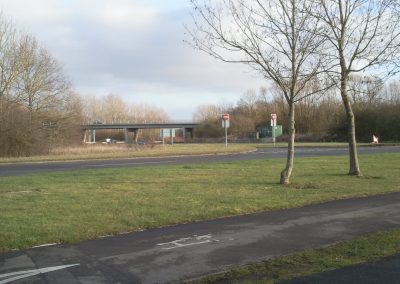 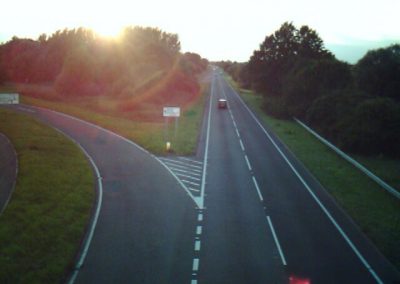 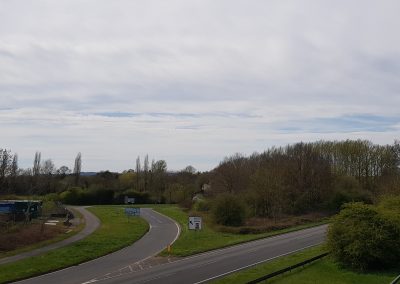 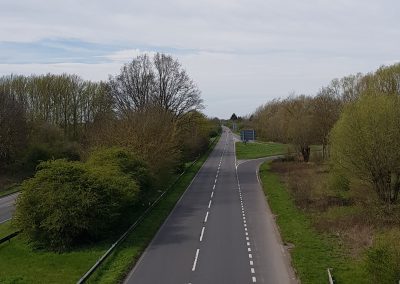 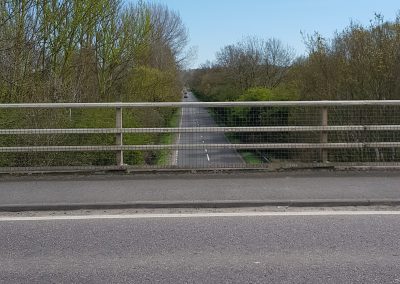 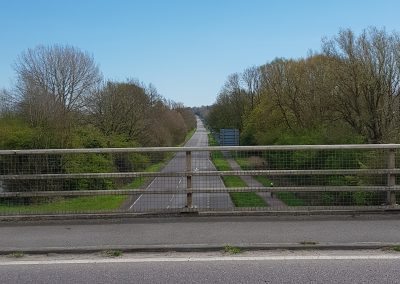 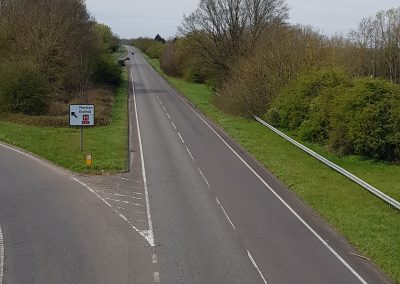 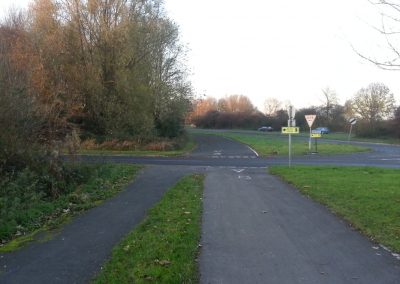 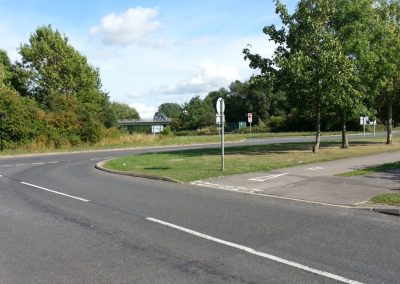 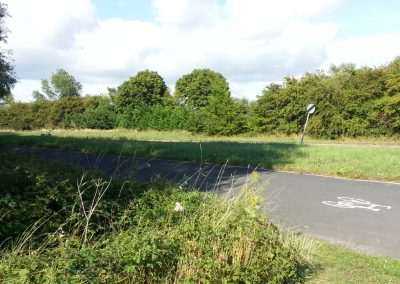 This drawing of the planned fly-over bridge across the Northern By-pass is seen looking towards Headington with the road to Elsfield on the left hand and the road to Marston and East Oxford on the right. The drawing is by Mr. Frank Coxon, of the County Surveyor’s Department

A FLY-OVER bridge to eliminate the danger spot at the junctions of the Northern- By­pass with the Marston and Elsfield roads is planned by the Highways Committee of Ox­fordshire County Council.

If the scheme is approved by the Ministry of Transport, the bridge will run on the line of Marsh Lane, with the object, of closing the Mill Lane junction and the Marston—Elsfield stag­gered access to the by-pass.

In this way all traffic crossing the by-pass will use the bridge above it.

The scheme follows concern expressed by Marston Parish Council at the dangers at the Mill Lane junction and at the Marston turn, where serious accidents have occurred.

There should no longer be any need to turn right across the by-pass. The plan will also provide a by-pass to Old Mar­ston village.

Oxford City Council was on Tuesday criticised for being keener on getting the Marston Ferry link road built than it is on seeing the completion of the dual carriage-way for the Northern By-pass.

Members of the monthly meeting of Marston Parish Council said if the City Council showed as much enthusiasm for the completion of the scheme for the by-pass as it did for the link road it would serve the interests of public safety.

Mrs B. Deam said that it was the Parish Council that was ‘shouting the loudest’ about the notorious by-pass. The City Council seemed apathetic in the matter.

The stretch of the road where most of the fatal accidents happened was within Marston parish, she said.

“It seems we’re back to where we started in our efforts to stop the slaughter on this terrible road,” she said. “We have got nowhere. And people are going to be killed.”

“When the by-pass was first built, it was alright. But the increase in traffic has made it a death-trap.”

Mr. A. L. Pollard said he doubted whether any short stretch of a road in the country could have a worse accident rate. He suggested the Parish Council write to the Minister for Transport deploring his refusal to grant their request for a system of controlled overtaking on the by-pass.

Nothing would be done, believed Mr Pollard, “unless we do sufficient jogging.”

It was decided after Mrs Deam had suggested that a petition be drawn up to postpone any further action until a reply had been received from the Minister to the Parish Council’s request for an early completion to the dual carriage-way.

By-pass crashes are ‘below average’

Lord Lindgren, Parliamentary Secretary to the Ministry of Transport, told Lord Segal in the Lords yesterday that during the ten-year period ending December 31, 1964, 126 people were seri­ously injured and 24 were killed in accidents on the Oxford Northern By-pass. This was below the national average.

Asked what he meant by the national average, the Minister said  it was a three-lane road, visibility   was   good   and   accident rate as such was not high.   But where accidents did happen    they     were     usually head-on collisions and fatalities were high.   Recently there had been  two   accidents   in  which five  people were killed.

The Minister considered that the road should be brought up to dual carriageway standards as quickly as possible. Work would begin as soon as the necessary acquisitions and con- tracts had been made and the road should be available to traffic early in 1969.

Lord Segal said, ” I cannot thank the Minister for the nature of this reply. Is he aware that this Oxford by-pass is regarded locally as yet an- other lost cause? Isn’t it a pity that this senseless slaughter is now to be allowed to continue for at least another four or five years.”

Lord Lindgren said all accidents were to be regretted and the were regretted most tragically by those directly associated with the victims, but in planning road improvement – and there was a vast number of roads which have to be improved – there had to be a programme.

The Minister had accepted the urgency of this one and the were going ahead as quickly as they could with land acquisition, contracts and so on. The Divisional Road Engineer was having discussions with the local authorities to make sure that the improvements could be made.

Lord Segal said that he realised that things were apt to move very slowly in Oxford, but would not the Minister urge a higher priority for the completion of the road?

Lord Segal then suggested that there was already land available for the completion of the by-pass.

Lord Lindgren said some landowners have been most co-operative but others were difficult, and it was because of these difficulties that the Minister and the department were considering whether or not work on this road could be carried out in sections, thus avoiding delays over acquisitions.

But taking a contract of a million pounds like this in sections meant that the contractor could not carry out the work successfully and it added to the const.

Lord Segal proposed that the white lines on the road should be altered to prevent overtaking and he also suggested that there was room by the hedgerows either side to make a dual carriage way without further acquisition.

Lord Lindgren said altering the white lines was one of the suggestions now under discussion with the City and the County.